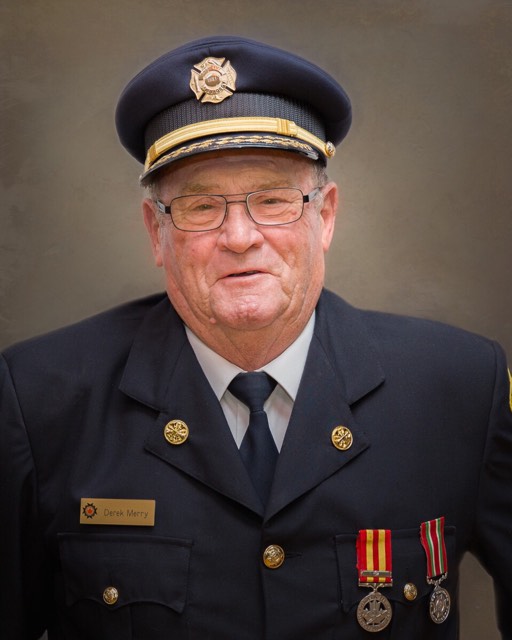 It is with profound sadness that we announce the peaceful passing of Derek Arnold Merry, age 80, of Cheticamp, surrounded by his family in the Sacred Heart Community Health Centre after a brief illness. Loving husband to Georgina (Diddee), Dad to his 4 children, Papa and Grampa to his 10 grandchildren and 5 great-grandchildren, Uncle Derek to his many nieces and nephews, and Daddy to his daschund Heidi, Derek’s devotion to his family was evident in all that he did, as was his love for his community, which he served with great pride. He gave 38 years to the Cheticamp Volunteer Fire Department, making him their longest-serving member. After his family, he regarded this as his greatest accomplishment.

His community involvement did not stop at the fire hall. He was also a founding member of the Cheticamp Search & Rescue and the Highland Snowmobile Club, a board member of the EMO Committee, and of GAMS. He worked in the fishing industry for 47 years, starting first in 1972 with EP Melanson, then HB Nickerson, Paturel Seafoods, the Barry Group, and finally with his dear friend Hector MacKinnon of Ballast Ground Fisheries. He was also a member and vice-president for 28 years of the Cheticamp Fisheries Monitoring System. Prior to entering the fishing industry as a buyer, he owned and operated his own Esso service station. After becoming a licensed mechanic in 1958, he married the love of his life in 1960 and spent his entire life in Cheticamp. He loved to snowmobile and was recognized by Bombardier as one of its longest owners and riders with over 53 years on the trails. He was the first Bombardier dealer in Inverness County when he began selling the machines in 1966.

Derek was a pillar of the community as well as of our family. He was never one to turn away a person in need, and in the last weeks of his life, we were grateful and amazed to hear others’ tales of how Derek helped them, whether it was with employment on the wharf or at the gas station, a lift in a snowstorm, a place to stay, or by telling stories of others who had passed before him, keeping their memories alive. Never one to leave a good story unembellished, Derek had as many stories as he had buddies — at least one for every place he ever visited — and loved to share his wisdom about cars, the weather, and life, with any and all. He taught us how to drink good whisky and beer, change a tire, to put ourselves in the service of others, and to live life with humour and dignity.

He was predeceased by his parents Helier and Nellie, brothers Harold and Winston, in-laws Joseph and Malvina Maillet, son-in-law Steve Williams and niece Debbie. He will be forever remembered by his wife of 59 years Georgina (née Maillet), his sons Dale in Cornerbrook, NFLD and Darren (Lynne) in Bridgewater, his daughters Brenda Williams in Reno, Nevada and Shelly Merry-Aucoin (Réné) in Cheticamp, his grandchildren Lindsey (Chris), Colin, Natasha, Joseph, Karolyn, Jaymee, Derrica, Rachelle, Riley and Eoin, and 5 great-grandchildren, his sisters Helen in Stellarton and Gloria di Blasio (Pat) in Montreal, his brother Franklin (Ethel) in Cheticamp, and special niece and nephew Shunda and Eoin MacInnis, as well as many other nieces, nephews, grand-nieces and grand-nephews, and extended family members all over the world.

The beginning of his life was marked by being the first baby born in the Sacred Heart Hospital in Cheticamp, and the end of his life was made ever more dignified by the loving care he received from the doctors and nurses (his ‘morning angels’) at the Sacred Heart Community Health Center and his palliative care team of Dr. Ritter and nurses Paulette and Diane. His family owe them all a debt of gratitude that cannot be quantified. A visitation will be held Tuesday, March 26th, at the Chéticamp Funeral Home from 2 to 4pm and 7 to 9pm. A memorial service will take place Wednesday, March 27th, at 10:30am, in Église Saint-Pierre in Cheticamp, with Fr. Peter LeBlanc and Rev. Maggie Plant officiating with burial taking place at Saint Andrew’s United Church cemetery in Pleasant Bay at a later date. In lieu of flowers, memorial donations may be made to Saint Andrew’s United Church, the Nova Scotia SPCA, or the Sacred Heart Palliative Care Society.