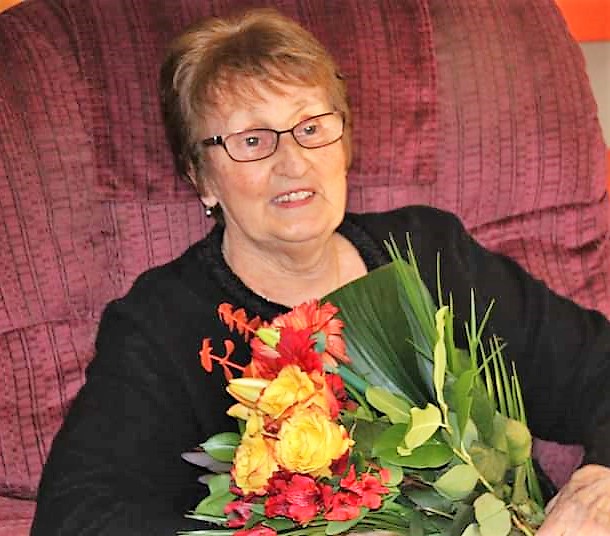 Age 84, formerly of Margaree Forks, passed away peacefully on Sunday, May 23, 2021, at the Inverary Manor, Inverness, with family and loving staff at her side.

Born in Sydney on October 1, 1936, she was the daughter of the late Frances (Armstrong) and the late William Andrews. At the age of 18, she moved to Margaree, where she met Austin (Papa) next door, with whom she shared 55 years of marriage, until his passing in 2011. Married at the age of 19, they raised six children together. For many years, Joan worked as a waitress at the Margaree Lodge, followed by many years as a receptionist at the Margaree Forks Tourist Bureau. Joan left a mark on so many people’s lives. She was a woman of strong Christian faith and a longtime member of St. Patrick’s CWL.

Grammie, also known as Nanny, loved the beach, enjoyed a trip to the casino, had a deep passion for flower gardening, and enjoyed bird-watching, as her knowledge of birds was like no other. Her family was her world and many stories were shared with her grandchildren about Nora’s pancakes, Washington pie, her move to Margaree, making bread every day, and so much more.

The family wishes to extend heartfelt thanks to Joan’s former homecare workers, the caring staff of the Inverary Manor where she resided for the past eight months, as well as to Dr. LaFrance, Dr. Ritter, Laurie Ann MacDonald and Lyndsey Drozdowski for the care and sincere compassion shown to her.

Cremation has taken place. Due to COVID 19 restrictions, a funeral mass and burial to be held at a later date.  Donations in Joan’s memory may be made to St. Patrick’s Cemetery Fund or Inverness Palliative Care.