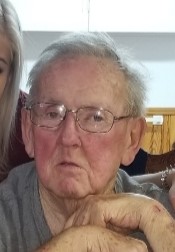 Aged 88, of Margaree Forks passed away peacefully on Thursday, November 7, 2019 at the Inverness Consolidated Memorial Hospital with his family by his side. Born on May 26, 1931 in Halifax, he was the son of the late John H and Florence (Kavanaugh) Maclean.

Dad was well known in the construction industry as he was a reinforcing steel contractor for many years and worked all over the Maritimes. He loved watching the Toronto Maple Leafs, Toronto Blue Jays and growing vegetables. He met a beautiful woman from Cape Breton, married her, and made Margaree his forever home.

He is survived by his three children, Shaun (Cecilia) Fort Saskatchewan, Alberta, Sheldon, Margaree Forks and Therese, Port Hawkesbury, nine grandchildren (Cole, Nakiya, Brecken, Connell, Aaron, Kayden, Curran, Alexander, Kyleigh) and several nieces and nephews. Dad was predeceased by his loving wife of 48 years, Christina Rebecca and brothers Finlay and Joseph. He was the last of his immediate family.

Dad had an excellent memory, he never forgot a name, a face or a phone number. He could still rhyme off his two brothers service numbers like they were the next-door neighbors phone numbers. He also cherished the visits from his friends like Johnny Albert Coady.

Family would also like to thank the staff from home support, continuing care nursing and ICMH for the care they provided dad.

Cremation has taken place. Visitation will be from 10 to 10:45 a.m. followed by funeral mass at 11:00 a.m. on Thursday, November 14, 2019 at St. Joseph’s Church, S.W. Margaree, with Father Macdonald Ibeh officiating. Burial in the parish cemetery. In lieu of flowers the family asks that donations be made to the Inverness Hospital, St. Joseph’s Parish or a charity of your choice.