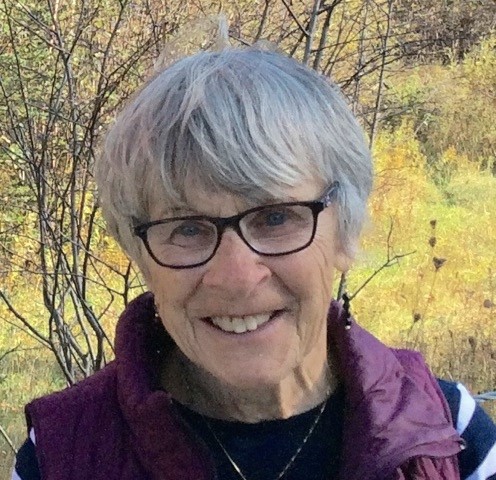 Age 87, Chéticamp passed away peacefully in her sleep on Saturday November 16th, 2019.

Married to the late Joseph Edmond (Joe) Aucoin in 1952, they raised seven children in Toronto – Alan (Adrienne), Joanne Patience (Paul) Strome, Norman (Karin), Brian (Teresa), David (Shelley), Kevin (Lynda) and Steven (Sandi). Her ambitious work ethic was a positive example to her family, as was her love of winter sports – whether tobogganing, skating, or skiing – she was always willing and able to join in the fun with her children. She was a big fan of the Toronto Maple Leafs. She was always present in the kitchen ensuring healthy meals and snacks were prepared and healthy lunches were packed. She was an avid storyteller and for almost two decades read her children stories before bedtime. She became an accomplished seamstress, knitter, and took great delight in baking and cooking for family and friends, hosting showers and other parties, especially during the holidays.

Every summer, Loretta and Joe drove to Cape Breton for their vacation and their children soon shared their attachment to the island’s culture, the rugged environment, their extended family and the music. Taking early retirement, Joe and Loretta moved to Point Cross in 1982, where she began a life-long love of walking an hour each day. Five years later, they returned to Toronto when Joe’s health deteriorated, and he passed away within two years. She remained in Mississauga, where she was an active grandmother to her many young grandchildren, until they had all grown up. It was also during this time that she began attending live theatrical performances, which she enjoyed tremendously. Twenty years later, at 75 years of age, she retired once more to Cheticamp.

Many thanks to the caring staff at The Foyer Père Fiset who made her final months in Long Term Care as comfortable as possible during her rapid decline.

Visitation will be held at Chéticamp Funeral Home on Friday, November 22nd, 2019 from 4 -7 p.m. Funeral mass will be held at Église Saint-Pierre, Chéticamp on Saturday November 23rd, 2019 at 10:30 a.m. with Father Pierre Antoine St. Cyr officiating. Family and friends are invited for refreshments following the mass at the Chéticamp Senior Citizen’s Hall.