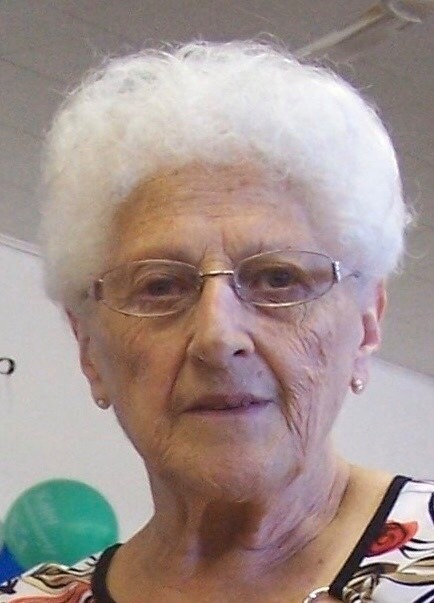 It is with deep sadness and love that we announce the peaceful passing of Stella Éléonore Chiasson, age 88, at Le Foyer Père Fiset in Chéticamp on April 12th, 2020. Born in Saint-Joseph-du-Moine on July 10th, 1931, she was the daughter of the late Patrick (à Joe) and Marie-Belle/Minnie (Deveau) Aucoin.

Stella was a school teacher for 35 years in Saint-Joseph-du-Moine. She was also school principal for a few years before retiring. Her joie de vivre and love of her community were certainly demonstrated in the many concerts and fundraisers that she organized while she inspired others to share their many talents. Coming from a family who loved to sing, she never missed an opportunity to gather in song. As well, Stella used her special gift by participating in the church choir for decades. Her beautiful and strong voice could be heard above the others.

Stella was a natural born leader and a pillar of strength in her community. When something needed to be done, one could always count on her. She will forever be remembered for her kindness to others, faith in God and as a devoted Catholic. How appropriate that this lady of deep faith was carried to heaven on Easter Sunday. She greatly contributed to the community and many organizations. She dedicated much of her life to St. Joseph’s parish as a volunteer and was well known for being of huge assistance to the priest who depended on her for various tasks. She made sure that everything was ready for when the priest arrived in church to celebrate mass or for other religious functions. She volunteered as a lector, sacristan, choir member, parish council member, liturgy committee member and more. For years, she was the person to call for church bulletin announcements and would visit with families who lost a loved one to help them choose the readings for the church service and go over the details of the funeral. On those occasions when mass was cancelled, she would receive a phone call asking her to notify other parishioners.

For many years, she was a volunteer with St. Vincent de Paul Society and the St. Joseph parish hall committee. She was a founding member of the Sacred Heart Hospital Auxiliary of which she became an honorary member. She was presented with a lifetime membership for 25 years of service. She often spent time with patients in the hospital giving respite to families. A very proud moment was the year Stella represented the Inverness County volunteers at the provincial ceremony in Halifax. She was also a member of Les Dames de Ste. Anne and two organizations for senior citizens – Les Nouveaux Horizons (Saint-Joseph-du-Moine) and Le Club des Retraités (Chéticamp). She was also involved with the Girl Guides and “les Étincelles” for a period of time. She was known as well for her willingness and ability to cater for large groups on a volunteer basis for special occasions, spending many hours preparing at the parish hall.

On New Year’s Eve, 1989, Stella watched with a broken heart, as a raging fire consumed the 100-year-old St. Joseph’s Church. One week later, Stella joined forces with other parishioners who were instrumental in organizing a building and fundraising committee towards the construction of a new church. This cause was very dear to her heart and became a reality with the first mass celebrated in the new structure on December 24th, 1991.

Stella lived life to the fullest and voiced her common saying “Ça pourrait être pire” (it could be worse).  She was an avid reader, always looked forward to the weekly lexicon in the Chronicle Herald, loved walking, colouring, cooking for others and picking berries.

In December 2015, Stella and Théobert became residents of Le Foyer Père Fiset in Chéticamp. They were the first couple to move to the RCF – Jeunesse d’Hier  portion of this long term care facility. Stella and her sister Catherine, also a resident, participated in many recreational activities. Just this past February, they got dressed up in costumes for Hawaiian day. These sisters loved laughter and bringing smiles to other residents and staff.

She will be dearly missed by her beloved husband of 62 years, Théobert, her son Linus (Linda), granddaughter Katrina (Eric Ouellette) and her two great-grandsons who she adored, Logan and Chase, all of Gatineau, Québec. She leaves behind her sister Catherine Aucoin of Chéticamp, brothers Philias Aucoin (Laura) of Chertsey, Quebec and Gérard Aucoin (Therese) of Chéticamp. She will also be sadly missed by her many nieces and nephews. We cannot help but mention Stella’s special friendship with her long time neighbours, Semi and Jeannine Larade and their family.

Besides her parents, she was predeceased by her sisters Elizabeth, Hermine, Celina, Therese and Lucy May as well as brothers Freddie and Léo and many other loved ones.

The family would like to thank the staff of Le Foyer Père Fiset for the devoted and loving care given to Stella. As well, special thanks to the doctors and nurses of the Sacred Heart Community Health Centre for their care and compassion while treating Stella during her final journey among us.

Cremation has taken place. A funeral mass will be celebrated in St. Joseph’s Church, Saint-Joseph-du-Moine and will be announced at a later date due to the Covid-19 pandemic. Memorial donations can be made to Le Foyer Père Fiset or the Sacred Heart Hospital Auxiliary.