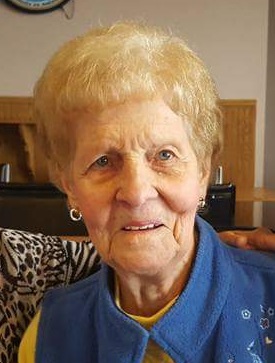 We are saddened to announce the death of Victoire Chiasson, who died peacefully surrounded by her family at the Foyer Père Fiset, in Chéticamp on February 5, 2018. Victoire was born on April 30, 1927, daughter of the late Edouard LeBlanc and Cecile Camus. She was raised in the Cape Breton Highlands (le Cap-Rouge) with her 16 siblings. She is survived by her brother Harry (Gloria), sisters Elizabeth, Dorothy, Edith, daughters Jean (Greg), BettyAnn, and Sylvia (Patrice), grandchildren, Andrew, Kyna (Kara), Kendra and Robyn, great granddaughter Summer and many nieces and nephews. She was predeceased by her husband Frederick Chiasson, brothers, Wilfred, Neil, Angus, Georgie, Joseph, Didace, sisters, Hilda, Marie Emma, Annie Rose, Rose Anna, Evelyn, and Della. Victoire was known by all to be a kind, loving and warm person, who always welcomed people into her home with a smile on her face. She was especially fond of fiddle music and step dancing, and even in her late 80’s would attend the Saturday afternoon ceilidhs at the Doryman tavern. She cherished the time she could spend with her grandchildren and great granddaughter. She had a passion for cooking and baking, especially traditional acadian dishes. Her family would like to thank the staff of the Foyer Père Fiset for the excellent care that Victoire received. A memorial mass commemorating her life will take place on Friday, February 9th, 10:30 a.m. at l’Église St. Pierre with Father Peter LeBlanc officiating. Burial in the parish cemetery. Donations may be made in Victoire’s memory to the Foyer Père Fiset: P.O Box 219, Chéticamp N.S, BOE 1HO.