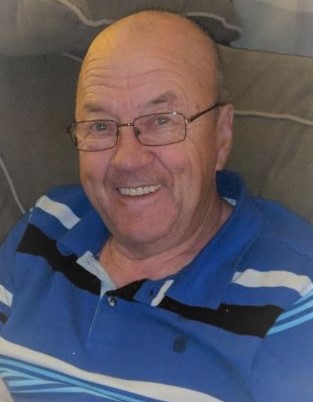 71, known as Davy to everyone that knew him, died peacefully surrounded by family on Saturday, June 4th, 2022 at the Foyer Père Fiset Guest Home, Cheticamp.

Born in Cheticamp to Marie Emma (Leblanc) and Joseph Aucoin, he was the youngest of 8 children.  He was predeceased by both his parents along with his two sisters, Marie-Julie and Carmella; three brothers, Yvon, Gordon, and Georgie.

Davy grew up in La Prairie.  He moved to Toronto at the young age of 16 and found work through several different means.  He and some of his friends would make frequent weekend trips to Cheticamp throughout the summers.  It was during one of these trips he would meet his future wife, Catherine Mae.

Davy and Catherine Mae eventually settled down in New Glasgow where they both started working at Michelin Tires.  They were married in Cheticamp on July 23, 1976.  They welcomed their first son Shawn in October, 1978.  In the early 80s, Davy and Catherine Mae moved back to their hometown of Cheticamp where they welcomed their second son Jeff in January, 1983.

He started working alongside family members in carpentry, electrical, and home heating before eventually working as a heavy equipment operator with Chiasson Brothers.  He had a passion for heavy equipment which he operated for a few different companies until a knee injury forced him into early retirement.  He also opened his small engine repair business where he could fix anything.  He always went out of his way to help anyone.

Davy loved the outdoors.  He spent many hours 4 wheeling in the mountains with his brothers and close friends.  He was a member of the Search and Rescue and Highland ATV clubs.  His other past times included NASCAR, playing card games such as Euchre and crib, and playing pool.  He and Catherine Mae would regularly take relaxing drives in the park with pit stops for ice cream.

Very rarely would there be a week in the summer when snow crab or lobster wasn’t being cooked in the barn, his second home.

His greatest love was for his family, especially his wife, sons and 5 grandchildren. Kids were drawn to him, and it brought him great joy to make them laugh. He found great joy following his two sons through the arenas during the hockey years.

The family would like to thank the staff at Sacred Heart Community Health Centre in Cheticamp and the Highland Manor in Neil’s Harbour for the care received during this time.

Visitation will be held on Friday, June 10, 2022 at the Cheticamp Funeral Home from 6:30 to 8:30 PM.  Funeral mass will be celebrated on Saturday, June 11, 2022 at 10:30 AM in Église St-Pierre, Chéticamp with Father Pierre Antoine St. Cyr officiating. Burial to follow in the parish cemetery.

In lieu of flowers, donations can be made to the Canadian Mental Health Association of Canada or the Sacred Heart Community Health Centre,  Chéticamp.